Reservations were capped at a maximum request of four diners per booking, with a password mailed out to confirmed guests in order for them to gain access to a covert website to learn where dinner was to take place. I unfortunately, did not send in my request fast enough as it took a mere eight minutes for the event to become solidly booked. With a wait list of 2600, I was sorely disappointed and hoped that another event would be announced (sooner rather than later).

As luck would have it, a couple of friends did manage to get a reservation (lucky ducks) – and invited us to join them for dinner (OMG OMG OMG….hell yes!). Needless to say, we were super excited to have had the opportunity to indulge with them. Thank you shout out goes to Paul and Craig. We owe the both of you big time 🙂

After much humming and hawing over the menu, we figured out that the best plan of action was to be gluttons and share everything. We struck off only two menu items and patiently waited for the feast to begin.

The hot vinegar beets with orange and thyme were a welcome addition to our order as the two ladies beside us did not have enough room to finish these off. Sadly, I didn’t take a photo, but they were utterly delightful.

The Original Tongue on Brioche 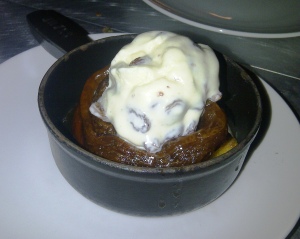 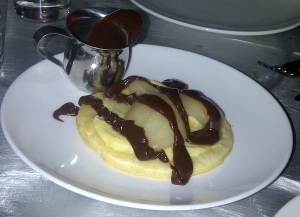 Sadly, this was the end of our delicious meal…and when we asked about the possibility of dining in the future – we got a response that there would be four more pop-up locations in 2012. Two locations somewhere in Canada and two somewhere in the United States (a little birdie told us one location might be San Francisco). Hmmm….can someone say foodie road trip?

We used all the lines up on the front of the bill!

All in all, it was a great night filled with amazing, unbelievable food and company. For one lucky couple, it even marked a bigger celebration as we heard that someone in an earlier seating ‘CHARPOP’ped the question sometime between the Rabbit Pie and the Beef Cheeks. One hundred percent success rate on all fronts!

I'm just a girl who is passionate about food. It is my personal quest to try to expand my culinary horizons both at home and abroad. However, I was not always passionate about food. I had my epiphany much later when I got my very first job...at a sushi joint here in town. And just like that "Hook, line and sinker"...a foodie was born! I'm a P/T blogger, P/T yogini...but always a foodie.
View all posts by Eunice »
« Eating out way too much lately
Brrr….it’s Winter! »

Topics to Chew On